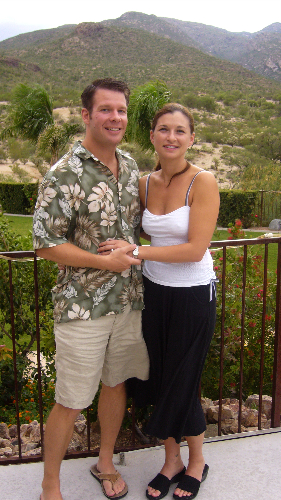 Dave Kendall and Debi Mitchusson were wed at Saguaro Buttes on Aug. 9th, 2009.  I had the privilege and honor of performing their  ceremony and have enjoyed getting to know them over the last several weeks. They are a wonderful couple with a bright future together. I wish them God’s blessing. They have a web page which has the following story of how they met and how Dave proposed, it is called “Our Story”.

ONCE UPON A TIME…How We Met

As most of you know, we met at work. We are both in the Air Force. Dave is a pilot and I am a navigator. Can you think of a better match?!? Although we were stationed together since 2004, various trips to the Middle East kept us from meeting until a fateful trip in January 2006. While flying together from Tucson to Kuwait, an unexpected engine problem caused a 8-day delay on the island of Crete in the Mediterranean Sea. We have been together ever since.

Dave grew up in Northwest Indiana, aka “Da Region”, and attended the Air Force Academy. He entered the Air Force in 1999, graduated pilot training in 2001, and has been in Tucson since 2004.

Debi was born in Florida and lived there until the family moved to Georgia when she was 10 years old. She went to Reinhardt College and eventually graduated from Kennesaw State University. After a short stint in the Peace Corps she entered the Air Force in March 2001, and has been in Tucson since 2002.

How He Proposed (in his words)

I had intended on proposing during a carefully planned hiking trip in the mountains with the question coming at an overlook while the sun set over the entire city of Tucson. But, as is the case with much of our relationship, fate stepped in. After several weeks of delays in the ring showing up, a highly unexpected Saturday delivery by the FedEx man, with Debi in the adjoining room, brought a change of plans. After one look at the ring, I lost all ability to keep it to myself and had to put it on her finger as quickly as possible. With ring in case and case in FedEx box in hand, I got down on one knee, thankfully remembered about half of what I had intended to say, and asked Debi to marry me. 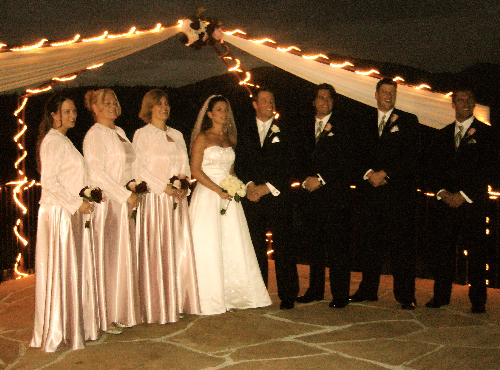 Their web page can be found at http://www.mywedding.com/daveanddebi/index.html