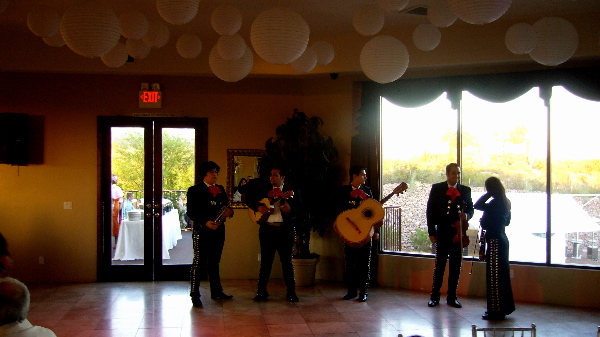 Mariachi are a popular musical group, originally from Cocula, Jalisco, Mexico. The original Mariachi were Mexican street musicians or buskers. As to the name “mariachi” standard Spanish dictionary’s name the French word mariage (meaning wedding or marriage) as a possible origin, and date it back to the 1860’s. Mariachis are hired to play at events such as weddings and other formal occasions, such as a quinceanera. Recently at a Saguaro Buttes wedding, Mariachis were hired to play for a hour or two before the dinner hour.  Mariachis can vary in numbers, this group had five.  This wedding used round lanterns hung from the ceiling which made for a nice touch, especially when it was time for dancing, the colored lights reflecting off these lanterns made for a very colorful atmosphere.