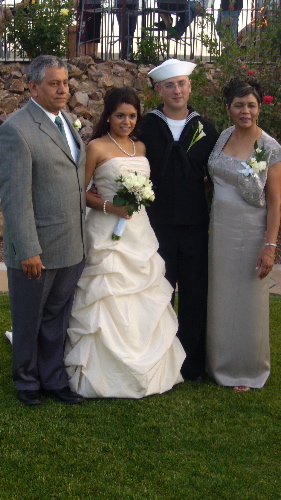 Scott and Diana were married on May 30, 2008 at Saguaro Buttes at 6:15 PM. They had a beautiful balmy evening, with a gorgeous sunset. Scott is in the Navy and wore his uniform, as did his best man, for the wedding and reception. A delicious meal of Tuscan Chicken, roasted potatoes, and steamed vegetables was served. Scott and Diana met in January 2006 at the Olive Garden where they both worked at that time. Scott and Diana will be moving to Florida as Scott will be stationed at Pensacola with the Navy.